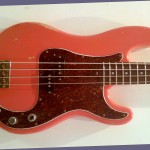 Few things in the vintage guitar market are as confusing as the custom guitar colour often referred to as Salmon Pink.  To understand why, you have to go back to Fender’s paints of the 1950s and 60s and realize they were also the automobile paints of the time.

In that era of American pop culture, rock ‘n’ roll and cars had more influence than anything else.  Fender’s 1960 colour chart reveals they often used the exact same shades of DuPont nitrocellulose lacquer as Ford and General Motors … including a Fiesta Red, shown here on a 1956 Ford Thunderbird. 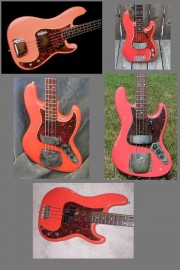 Fender’s guitar spraying methods weren’t consistent.  Sometimes they used an undercoat … sometimes they simply sprayed colour directly on to bare wood, or over a previous colour that hadn’t worked out.  But they always finished off with a top coat of clear lacquer (which was also nitrocellulose based).  But as this clear lacquer aged, it yellowed significantly and distorted the shade of the original base colour.

Not only that, Fiesta Red itself turned out to be an unstable colour that was highly-reactive to the UV in sunlight and fluorescent light.  Fender’s colour charts from 1960 to present show there was never a colour called Coral Pink or Salmon Pink.  What is often called ‘pink’  is aged and faded Fiesta Red, where the red pigment has deteriorated towards pink or orange. 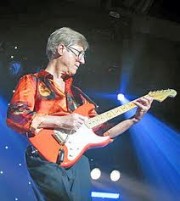 In early 1960s’ Britain, due to the popularity of the Shadows, the Stratocaster guitar and the Precision bass were the guitars of choice.  History has it that the various importers (Jennings, Selmer and Arbiter, in turn) found there was more demand for guitars that looked like Hank Marvin’s red Strat than for the standard Sunburst version.  So a lot of Fenders are believed to have been re-sprayed on arrival in the UK. It’s said that the lacquer used by the importers was slightly pinker than Fender’s factory colour. 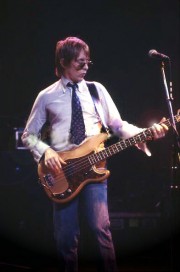 When I bought the used Fender bass that I went on to use with the Attractions, it was in a sorry state — stripped back to the bare wood and fitted with a white pickguard.  I bought a tortoiseshell replacement plate and then took the bass to Andy’s Guitar Shop in Denmark Street, in London, and asked him to respray it.  I distinctly remember asking him to do it ‘Salmon Pink’ … a term I’ve always used for faded Fiesta Red.  So, if I’ve unwittingly added to the myth of Salmon Pink, then good … because I’ve now made it the official colour of my new signature model Profile Bass.

15 Responses to The ‘Salmon Pink’ Myth