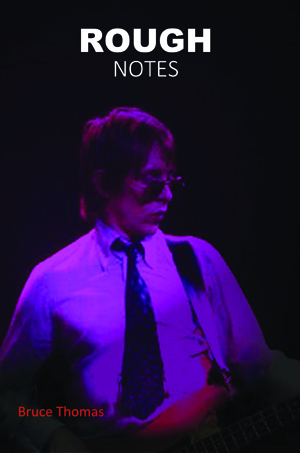 I was finally persuaded to write Rough Notes when a friend remarked: ‘There’s only one history of rock and pop …and you were there!’

It follows my career from the paper-round I did to buy my first guitar, and see the Beatles — all the way through to the Rock and Roll Hall of Fame …and beyond.

Obviously a major part of the book recalls my time as an Attraction. There are the background stories to all the albums we made — which answer a lot of the questions I’ve been asked on here over the years — and there’s even a wee bit about bass playing for those who want to know about that. And, I hope, it finally sets the record straight about the so-called ‘feud’ between me and ‘the Singer’.

But Rough Notes is far more than a personal memoir or catalogue of trivia — it also traces the entire story of rock and pop from its very beginning, right through to the present …despite the fact it’s sometimes been said that writing about music is like dancing about architecture.

Yes, there is only one history of rock and pop …and we were all there.

Buy at Amazon UK / Amazon US