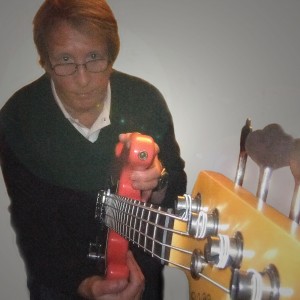 McCartney was up there with Jamerson as the freest of bassists: fluid, inventive, throbbing, you name it. They may have been the first two bass players of the rock era to receive the coveted All-Access Pass on their instrument. The All-Access Pass would later be used to infiltrate the deepest reaches of referential rock ‘n roll recordings by Bruce Thomas through his work with Elvis Costello & The Attractions.

How crucial Attractions’ bassist Bruce Thomas was to punk-pop icon Elvis Costello’s sound … His inspired performances on ‘This Year’s Model’ put him in a league of his own … Nearly every track on the album is a study of his independent and cocksure style … King Bruce rules the sonic landscape with killer tone, wicked articulation and inventive lines that seem to jump out of the mix and whack you across the face … it’s a must have for any rock bassist seeking some inspiration.

Bruce Thomas is one of the most brilliant and inventive bassists … the word ‘backed’ doesn’t do Thomas justice — his bass lines consistently brought Costello’s songs to a new level with tasty, melodic parts that fit perfectly with the chords, melody and lyrics … Full of playful syncopations, chords, feel changes and slides, his parts masterfully straddle the fine line between careful support and break-from-the-pack creativity … It just proves the power a bass line can wield — especially when it’s created by a master like Bruce Thomas.

Wanna learn to play bass guitar with impeccable phrasing, rock-solid groove and an adventurous sense of melody?  Go get any of the great albums by Elvis Costello & the Attractions and immerse yourself in the beyond-belief bass work of Bruce Thomas.  Everything you need to know about pop bass is right there.  Thomas’s agile Duck Dunn-meets-Duck Dodgers prowess on an oddly-colored bass lent muscle and finesse to the Attractions, one of the most versatile pop commando units ever to storm stage and studio and with whom Thomas was inducted into the Rock and Roll Hall of Fame.

Examples of his highly lyrical bass expertise abound — marvel at how he treats each verse of ‘Big Tears’; the bridge of ‘Radio Radio’; the brilliantly slippery ‘Accidents Will Happen’; the frantic ‘I Don’t Want To Go To Chelsea’; and so many other great songs.  Plus, if Thomas’s bass line to the classic hit ‘Pump It Up’ doesn’t make various parts of your anatomy shake like they have minds of their own, you should see a neurologist at once.

We’ve heard the melodic, the improvisational, and the simply driving. Bruce Thomas’s playing on “Lipstick Vogue” can only be described as virtuoso. I’ve been playing bass for 27 years. At this point, I can reproduce pretty much everything McCartney did and do a passable version of Entwistle’s “My Generation” solo. However, I will go to my grave with the painful knowledge that I will never, ever, ever be able to even manage a shitty facsimile of what Bruce Thomas does on “Lipstick Vogue.” I can try explaining it, but I’d only sound like an idiot, because frankly, I have no fucking idea what he’s doing in this song and less of an idea how he does it. Are human fingers even capable of moving that fast? And with that level of precision? And stamina? You want to hear the most complex, most exciting, most mind-boggling Rock bassline ever coaxed out of four strings? Here it is.