Hear the Profile Bass in action below…

Hi Bruce, guess what Santa brought me?  It’s ABSOLUTELY WONDERFUL, hands-down the best action, set-up and play-ability I’ve ever encountered on a bass! It’s incredibly light, which is such a relief after my previous basswood monster, but has waa-ay more power. The pickups sound like bloody Jazz pickups with the belly of a split-single, how did you do that?! I’ve had two Seymour Duncan Quarter Pounders on P-basses, a Quarter Pounder J-bass, J-bass Antiquities and none of them sound this balanced and bright at the same time whilst also being clean and noise-free! None of them are anywhere NEAR this good — they sound 3D! Like, they have a third dimension to the sound. So easy to get your classic tone now; all I have to work on is my playing. I never do reviews or demos, but I have to do one on this occasion. It’s such an amazing piece, and the tuning, it’s steady as a rock! I usually have to watch the needle waggle around and hope it’s in tune, this just sits there where it should be! Thank you for giving me the tone I always heard in my head! …I forgot to mention the perfect weight and neck. Was your original Fender this light? Phenomenal instrument, better than I could have hoped for. Thanks so much for making this beautiful piece of craftsmanship!! (Steven Ellen Starrar)

Hi, Barry and colleagues. Just to say a big thank you. I received my Profile bass today, and what an instrument it is! Fantastic clarity of tone (and loud!), super smooth neck, harmonics to die for – and all this straight out of the box! And it looks simply stunning! If you’re planning on buying the Mexican-built model of a rather famous brand, do yourself a favour and buy this instead. Why buy generic, when you can have something unique, with a certificate signed by a British bass legend, no less, for the same, indeed slightly less, money? Well done Bruce and everyone at The Bass Centre! (Jonathan Reeve)

The first thing about it that stood out was that the pickup is probably the loudest P-bass style pickup I’ve ever heard, and the low end response on it is astonishing! For sure, this bass can rumble the house! But it also has a clear ringing high end when the tone control is dialed up. Also notable is the sustain, hit a note and it’ll ring for nearly a minute … The neck is great! The fingerboard width is reminiscent of a ’60s P-bass, but the neck width is somewhat slimmer, making it really easy to play …the instrument is light and very comfortably balanced. All in all it’s a great instrument for the money, and it’s a world of fun to play. I’ve been using it nearly exclusively since I got it, and getting a lot of complements on it from other bass players. I have to say, out of the box I was a lot more pleased with it then with the last few new Fender basses I’ve bought. It certainly holds it’s own compared to other instruments of any price.  (Scott Reid)

The bass is a beautiful colour- that’s what strikes you first. Neck has a great satin finish and shallow profile which makes it very easy to play… a very distinct variant of the “P”. Sound is very much as one would expect from a split “P” configuration … a well-built, very playable, striking instrument. Comes with Elite Stadium 105s! … I thought I saw John McVie playing one on Sky News today – it looked like the headstock. Anyway, having played & owned the instrument for a few months, I think it is probably the most “Rod Mackay” bass I own & I have a lot of Fenders.  Tone, neck profile, colour, cost.  Good effort!   (Rod Mackay)

The bass arrived this morning. What a fantastic instrument. So lovely to play … Congratulations.  (Peter Gale)

The pickup output is considerably hotter than the standard “P” pickups. Really a great instrument!  … Do what you have to do to get a Profile. Bruce is absolutely correct. I’ve got 2 ’60s Precisions and they are both in the cases. I’m in the US and I think I ended up spending around $900 total with the shipping and import fees. I have not came across anything in that range of price that can touch it. I got 4-year old strings on it and it sounds great!  (Mike Miller)

This bass is amazing and I make you responsible for making me total addicted to it.  (Carsten Holt)

I swear this bass talks to me …so pleased ! (Barry Cartwright)

Available from the Bass Centre

The story of the Profile Bass

When the bass I used during my time with the Attractions was stolen some years ago, I looked far and wide for a suitable replacement. But as I’d customized that instrument quite a bit, eventually I decided that rather than adapting another vintage bass, I’d build one from scratch. When I mentioned this to my friend Barry Moorhouse at the Bass Centre in London, he reckoned there’d be other people who’d like one as well — he suggested we collaborate on producing a signature-model bass.

Barry started looking for the best manufacturer he could find, while I set about recreating the right body shape and doing test paint mixes in various shades of ‘faded red’. But the most important thing was getting the neck profile right (hence the name) to give maximum ‘playability’. 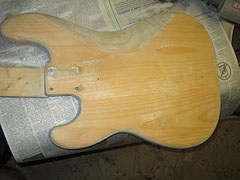 After a bit of experimenting on my part and many meetings with Barry, we had samples built in factories across Europe and the Far East — we worked on everything from entry-level basses to the elite bespoke instruments. One day we were sent a bass that stood out a mile from anything else we’d seen or played. Although getting the right bass was our only consideration, it turned out that this one was also one of the most affordable.

Anyone who’s watched the development of the Profile Bass over the past couple of years will know that it’s not a stock bass I’ve simply added my name to — but a genuine personally-developed signature guitar.  Our intention was not to produce a replica model or a phoney vintage guitar, but to create a new instrument true to the spirit of the original — a bass that’s a joy to play.  I’m happy to say that’s now been achieved.

As I no longer had my old modified 1964 P-bass for reference I used Barry’s own 1964 version to compare and contrast as we went along. We’ve also been lucky enough to hit on that chameleon blend of pink, orange and red that I call ‘Salmon Pink’.  It’s an amazing, almost-living colour when it’s got right like this — it never seems to look the same twice and looks slightly different in every kind of light.

After ‘distressing’ earlier versions of the bass, we’ve decided against this as the ‘travel-weary’ look has been a bit overdone of late.  (The clips on this page show one of the early prototype basses …new clips featuring the actual production model, seen at the top of the page, will be posted soon.)  Fake wear and ‘relic’-ing of an instrument doesn’t really convince anyone — the best way to make a guitar look used, is simply to use it.  And this is a bass you’ll certainly want to use. The best thing I can say is that I no longer miss my old bass when pick up the Profile Bass to play.

The neck width at the nut falls exactly between the classic P-bass and J-bass widths which, rather than being a compromise, actually offers the best of both.  The neck is sealed in a ‘barely-there’ satin finish which protects the wood but doesn’t affect the feel of the neck or make the hands ‘stick’ on the gloss.

But it’s the sheer playability of the neck — the perfect depth of the neck from front to back, giving the ideal action and string tension — that’s the stand-out feature of the Profile Bass.  And we can confidently say that this will apply to every guitar that’s made, because of the consistency of quality the manufacturer is providing for us.  We have confirmed this by not simply having single sample basses made, but by comparing the quality across a whole batch of instruments. I happily took one of these at random for my own bass.

In some of the video clips on this page, I’ve kept the amp at low volume so you can also hear the bass acoustically, and how it allows you to put expression into your playing.  We spent a lot of time getting the string action right, to create a real player’s instrument.

We’ve been able to use a lighter weight wood for the body that doesn’t sacrifice any of the intrinsic sound quality in any way.  A good test of a bass guitar is how it sounds acoustically — if it’s got that solid twang when it’s not plugged in (which it does) then it usually sounds even better when it is.  The natural warm punchy mid-range tone of the bass is brought out by the pick-ups that have been custom rewound according to the modifications I made to my original bass. 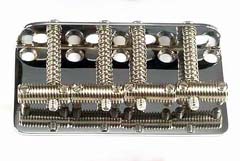 I’ve specified an older-style, slotted-screw bridge because, unlike the string saddles on later bridges, it allows you to vary the string spacing for right hand playing — I personally prefer the strings set at 20mm apart, rather than the standard 19mm.  In the past I used to ‘heavy string’ my bass with thicker gauge strings, but no longer feel the need to do that as the Profile offers as-near-perfect a playing feel as I’ve ever found.

This screw-thread style bridge has been fitted at my wish. At one of our regular meetings Barry suggested using a modern high-tech bridge to give more sustain.  ‘But I don’t want more sustain!’ I exclaimed.  Firstly, I think the natural decay of the note is a more authentic voice for this bass.  And secondly, the neck and body build is such that it already offers better sustain than any conventional P-bass  — in particular there are none of the ‘dead spots’ you usually find on the first string around the 5th to the 7th fret.  But while using a classic bridge, I’ve not specified retro-style, riveted, long-spindle tuners as their greater mass unbalances the bass.

Of course, you may disagree with some of my reasoning and want to tweak your bass in some way or another, which I hope you do.  But I’m more than happy and confident that all of the essential ingredients of a truly great bass guitar are firmly in place.