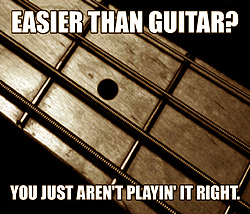 Forgive my vanity and indulgence here, but I was forced to LOL (as they say) when I read the comments on a guitar tab for Crimes of Paris (a poignant title, to be sure) on the guitaretab.com website…

“The tough thing about Crimes of Paris (as in many EC songs) is that he’s actually only playing five chords on the guitar, but the changes in the bass notes and the vocals are what you really hear. So, if you play it by yourself the way EC does on the album, it sounds like you’re missing a lot of important changes – and you are.

One is the pesky G with F bass (there’s no F major in the song) in the verses, which is tough to play on guitar. It sounds okay if you play a G7 there – the F will be in the chord, just on top instead of on the bottom. A similar problem is the Am with G# bass- which can be solved by flatting the A on the G string (what the hell chord is that anyway? Ammaj7?????)

The most original part is the bridge with the bassline walking up beneath the Am chord. Ami/B is, by
itself very dissonant, as the B isn’t part of an Am or Am7, but in context it sounds great. The end of the bridge is really strange with the same line continuing through D D# E with the Beatles-like chanting going on against it-I don’t know what to call those chords.

Luckily, it’s not too tough to work the bass notes into the chords on this one …I imagine that’s how Elvis played it as he was writing it.”

Well guys, I can exclusively reveal to you that it wasn’t! Maybe it had more to do with the bass player trying to make the chords sound more interesting.

As someone (who was accused of being me, though it wasn’t) said recently: Elvis may have written the book, every day, but it was the Attractions that designed to cover, chose the font and did the illustrations.