The Band That Prog Remembers (a little) 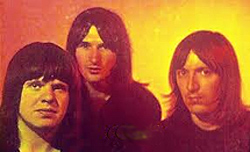 Following on from my earlier post The Band That Prog Forgot…

I just got an e-mail from Clouds organist, Billy Ritchie (r).  Apparently, on his website, Jon Anderson of Yes has finally acknowledged (a little) the vital role Clouds played in the inception of Prog Rock — and in the careers of the many who embraced it.

Clouds were very important in those early years.  I remember them performing Paul Simon’s America at a Marquee concert and at a gig in Wales.  As you know Yes eventually performed the song, I still do today in my solo concerts. Those far off days were very open and exciting. I did have dreams of all those bands touring together on a bus …great music, great times of innocence.  Jon Anderson (Yes)

As Billy himself adds: Only forty years too late! I suppose it’s safe to own up now?

145 Responses to The Band That Prog Remembers (a little)