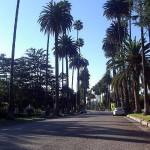 The first ever New Labour government had just been elected in England.  On my TV, a Richard Branson impersonator with a gurning grin and a wife with a mouth like a letterbox were glad-handing the peasants near the entrance to Downing Street.  The scene cut back to a weasely-looking man blowing kisses to the crowd and a fat man trying desperately to look like he could move in time to music.  For the time being, I was better off here in Los Angeles, thousands of miles away, in the New World …

Los Angeles is the most car-mad city in the world.  There are twice as many cars here as people; its freeway system handles more than twelve million cars a day and lucky residents spend an estimated four days of each year stuck in traffic.  So, Los Angeles isn’t the first place that would spring to mind as the ideal place to own a bicycle.

But the City of Angels isn’t all freeways, smog and neon.  There are several canyons that climb up to the ridge line of Mulholland Drive, where you can ride west all the way to the glittering ocean.  At the ocean, you can continue along the concrete ribbon that snakes the length of the beach … and follow a rollerblading nymphet with long, roasted limbs and a silicone valley of cleavage.  But today I wanted to clear my head.  I went to the garage and took out my bike.  Today I wasn’t planning to ride to the ocean … I would be heading inland, towards the mountains …

It’s only early morning and the temperature’s already touching 60°F.  The sky is a metallic pastel blue and the air has that faintly acidic ‘old car battery’ tang to it.  I’m riding my bike through Beverly Hills, where sprinklers are playing on the grassy banks of luxury homes, each trying to be more out-standing than its neighbours — Mother Goose cottage, Regency manor, Tudor mansion, Tuscan villa, Connecticut colonial, Spanish mission — all flanked by the giant green feathers of waving palms, edged by a lush tangle of bougainvillea and hibiscus, and fronted by lawns where white chairs sit patiently at white tables as, indoors, coffee bags sigh as their vacuum seals are released.

Through Beverly Hills … now I’m standing over my bike, waiting patiently for a break in the traffic, so I can make a left turn.  My bike is a ‘hardtail’ mountain bike with off-road tyres fat enough to deal with the pot holes (because most of the roads here are uneven and broken) but with tread slick enough not to drag. 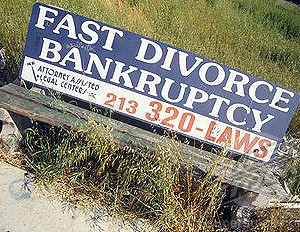 Soon after I make my turn I hit an unavoidable stretch where the traffic is wide, loud and unkind … where drivers keep up a steady fifty as they switch lanes and vie for position.  A Mercedes convertible pulls briefly alongside me, its stereo-system cranking out the soundtrack of the moment …‘all I wanna do is have some fun … and watch the sun come up over the Santa Monica Boulevard.’  The buildings around me — an ungodly jumble of banks, realtors, hamburger huts, copy shops and nail emporiums — sit in the new sunlight, casting their square black shadows.  For a few miles it’s neither fun, nor pretty.  I pass a bus stop where a bench advertises a law firm’s specialities: ‘Divorce and Bankruptcy’ … something that can often be achieved in quick succession.

Before long I’m into the hills, where short driveways spur off the road at impossible angles — towards homes where Hockney once splashed his canvasses … and where actors and rock stars perch their top-dollar nests and try not to think of the Big One.  Only a few days ago there’d been an earthquake — not the Big One … just one that left a light dusting of plaster as aquariums slopped over and Oscars and Grammys tumbled from shelves.  The gaps between the houses reveal a near-vertical dirt hillside with deeply-eroded grooves.  When there’s a flash flood here, the rain washes down the roads so rapidly that cats and dogs go missing and pick-up trucks loaded with lawn mowers and leaf blowers get completely turned around.

I’m heading east now, over the rump of Griffith Park and Silver Lake, dropping down into Eagle Rock and on towards Pasadena.  Every few blocks there’s an invisible boundary — like the one where Mexican oom-pah music gives way to the smell of Kosher food.  Then, through another invisible boundary, long before I’ve reached the mountains, I reach the ‘air-quality line’ where I realize how much worse it was an hour ago … and how much better it is now.  The visible boundary is where the green sprinkled lawns begin to give way to chaparral and rock outcroppings. 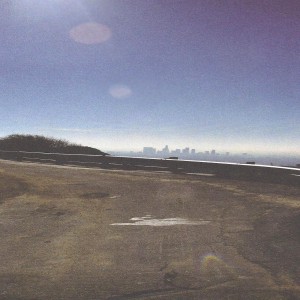 By late morning I’m into the foothills of the San Gabriel Mountains, at La Cañada Flintridge, where Angeles Crest Highway goes straight up for a mile like a ski jump in reverse as the urban landscape falls away behind.  Soon the road begins snaking upwards for eight miles in a slow-winding climb where every turn increasingly opens out the view.  I pause for a minute and look back over the land I’ve covered.  The glass towers of the LA business district and Century City appear as unreal the vista in any video game.  But, far away to the west, it’s clear enough to make out the great arc of the coastline.

At Clear Creek the road finally levels off and relaxes briefly and it’s possible to pick up some speed again, before the road rises in a new swell that makes my legs protest all over again.  Only another bike rider could know the feeling in my legs — there’s none quite like it.  Greg LeMond was once asked, ‘At what point does climbing hills become easy?’  He replied, ‘It never gets easier; you just go faster.’  In my case, it doesn’t get any easier.  And I just go slower. 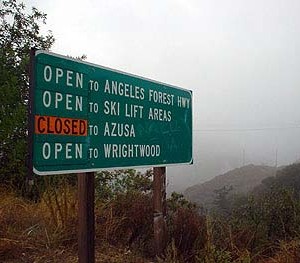 … I’m passing over the front of the range now, into a wilderness of spiky green cactus where I can hear all the small sounds again and there’s another vital change in the quality of the air.  It’s all much greener and not so dusty now.  The road here is usually closed from Thanksgiving to Easter and has only just reopened.  It’s fresh and chill and there are still mounds of old snow at the side of the road even though, just out of sight on the far side of the ridge, the Mojave Desert is baking in brilliant sunlight.  Apart from the thin ribbon of tarmac threading its way through the mountains, the only other signs of civilization are over to the right, on top of Mount Wilson — a few nondescript buildings and a cluster of antennae.

In the past, I’ve ridden the off-road trails in these mountains.  Riding a bike on the road involves less technical challenge … man and machine, bloke and bike, are simply geared to the rhythm of propelling each other along the road.  Without noticing, you become absorbed in thoughts of the past or future, in memory or imagination, and the bike has somehow become a time machine taking you back to feelings of thirty years ago.  And, in the moment of realizing how far away it’s taken you,  once again it’s a timeless machine that allows you to be present. 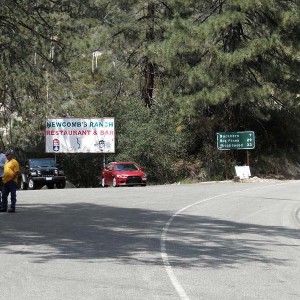 The switchback finally levels out at something over 5,000 feet, at Newcomb’s Ranch, where there’s an assembly of exotic motor bikes.  The place is a favourite with affluent weekend motorcyclists, as much as it is with everyone else, because it’s the only place to stop and eat on Highway 2.  Inside, a fire blazes in a stove made from an old oil drum.  I order and eat plate of nachos with everything — refried beans, guacamole, melted cheese — which tastes like the most righteous thing I’ve ever eaten.

Back on the road, I’m at the midway point between a bed for the night further along the way, or one back in LA.  Soon the long slow descent of the sun will begin to change the lay of the shadows.  For a moment it’s quiet and eerie.  High overhead and far away, I can just make out a passenger jet.  I recall sitting on just such a plane, not so long ago, and looking out of the window at a vast expanse of featureless land where I eventually picked out a thin black ribbon running from … somewhere to somewhere.  I wondered who on earth would ever go along such a road … or why.

It’s a cliché that any journey — whether by train, plane or automobile … horseback, bike or bus — isn’t only the distance travelled through the outer world but is also an inner journey through memories, dreams and reflections.  If a journey’s begun with that in mind, or later recalled from that point-of-view, it might be seen as a kind of pilgrimage, or search.

Maybe the ‘search’ is all there really is.  Like the singer who said he still hadn’t found what he was looking for … it may be the only truth we’ll ever find, is the one that keeps us looking.  But it’s a lot better prospect than being stuck with a conclusion.

… I pull my gloves back on.  Now I’ve a choice to make.  I can turn round and enjoy a thrilling freewheeling rush back to world I’ve come from.  Or I can push on to Wrightwood. 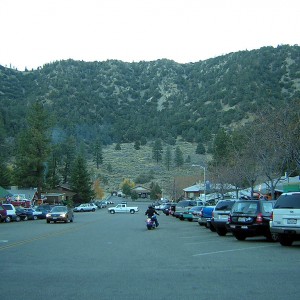